Home » Startups Create ALL the Jobs

I was a little sad listening to President Obama talk about his job creation plans last week.

Most of us in North America would agree that our highest economic priority is finding ways to create more new jobs.

My take on Obama’s plans is that he proposes to borrow more, or tax more, to subsidize companies to hire the people who are least employable. He also plans to require companies to “buy American” as long as that won’t increase prices more than 25%. In my opinion, borrowing, taxing and raising prices are all going in the wrong direction.

I wish Obama, and our other elected leaders, could appreciate that startups create ALL the new jobs in our economy.

The Kauffman Foundation recently published some fascinating new research clearly showing that all of the job creation in the American economy over the past 30 years has come from startups. 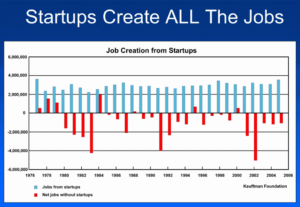 From the Kauffman Foundation press release: “The study reveals that, both on average and for all but seven years between 1977 and 2005, existing firms are net job destroyers, losing 1 million jobs net combined per year. By contrast, in their first year, new firms add an average of 3 million jobs.” (A PDF of the study is also available at that link.)

If governments want to make a difference in creating jobs, they should focus on:

In a post last week, I discuss how big companies haven’t been creating wealth for their employees from share price appreciation. The graph above shows the same thing – in general, big companies in North America just aren’t prospering in the new, global economy. The economic growth, and wealth creation, is happening in startups.