How Often Do You See Smart People Leaving a Big Company?

The article starts off with: “Several high-ranking Microsoft executives exited the company this week.” And ends with updates from tweets about other senior people leaving in the same week.

This isn’t just happening at Microsoft, it’s common in most big companies.

When I Graduated Everyone Wanted to Work in Big Companies

Back when I graduated from university in the 1980s many of the best and brightest grads wanted to get jobs in the big companies. That’s where the research money was, where the excitement was, and where the opportunities were to do really innovative work.

The Big Companies was Where the Big Money Was

The trend accelerated in the 1990s. Getting hired by Microsoft or one of the other big companies usually meant you’d get a sizable stock-option grant. With the buoyant markets in the 1990s, those options often created truly staggering amounts of capital gains.

Microsoft was Built on Stock Options

In the latter 1990s, the ownership of Microsoft was split about 50-50 between people who had invested money in the company – outside shareholders – and people who had invested human capital – employees and founders. Back then, over 35% of Microsoft’s fully diluted shares were options held by employees. I’ve met many software developers, and mid-level managers, who cashed out of Microsoft with tens of millions of dollars. Senior managers made much more. Is it any wonder the most innovative and most productive people wanted to get jobs at companies like Microsoft?

But look what’s happened over the last 10 or 15 years. If you factor out the dot com bubble in 2000, Microsoft’s share graph is essentially flat. The greatest software company on the planet hasn’t made any real money for its shareholders, or its employees, for over a decade. 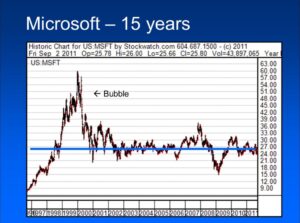 What about the world’s greatest chip company? Here’s Intel’s stock chart over the last 15 years. 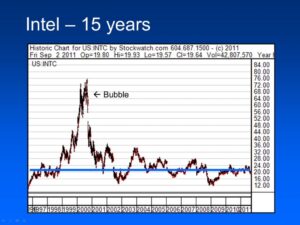 Or the world’s greatest networking company – Cisco? (My first company was acquired by Cisco when they bought Scientific Atlanta. Some of my friends still have Cisco options.) 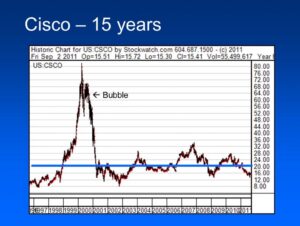 In the 1990s a good option position at one of these companies could give you enough to retire. But for the last ten years, they haven’t created any real value at all.

And this is what’s happened in the best of the big companies. To see an example of a less than excellent company, read my next post about what happened to Nortel over the same period.

Today the Best and Brightest Work in Startups

Why none of these big, great tech companies has had any stock price appreciation is a complex question. But what’s much easier to see is the effect on recruiting and retaining the really good employees. That’s a pretty simple, direct relationship.

The best and brightest either aren’t joining, or aren’t staying in, these big companies. Today, the best and the brightest are going to work in startups. That’s where the excitement, innovation and big capital gains are now.