If you are asking “how do I sell my company?,” you’re in the right place

Strategic Exits has been the M&A advisor to dozens of technology companies based in the US, Canada, Europe and virtually (with no physical address).

We have an excellent record in completing the sale of tech companies. We attribute our success to:

Exits can happen at all stages in the company’s lifecycle. For example, we have sold tech companies:

Selling a tech company is a unique experience every time. Young business owners may be selling a business for the first time and looking to start the next one. At the other end of the experience scale, tech veterans may be looking to monetize a career’s worth of effort in building their firm so that they can spend more time  with their family members and interests.

As noted in Team, we have captured our experience by developing thought leadership positions on pivotal trends in business exit strategy. We pioneered the concept of the early exit and have continued to research what factors position a tech company for an early exit.  We publish our research on why fully-remote companies sell for more money. And we have developed best practices on the characteristics of tech companies that are best positioned for an early exit.  We have forecasted the development of the robotics industry.

Each exit has a story to tell but unfortunately, the details of most exits remain confidential. But there are a few where the principals can disclose the firms exit strategy and the role of Strategic Exits.

In the blog posts below, we explore several interesting exits that highlight how to sell a technology company, with testimonials from the founders and angels whose lives we helped change.

Singular Software was the world leader in developing software to synchronize multiple video and audio clips during editing. Their software was an add-in for the video editing suites from Apple, Adobe, Sony and others.

Singular was founded by Dr. Bruce Sharpe in 2007. The company was based in Surrey, BC and was bootstrapped and virtual.

Singular was acquired by Red Giant from Portland, Oregon. Interestingly, Red Giant is also a virtual company, but considerably larger.

Vineyard was founded in Kelowna, BC in 2008 and was financed by Angels and small funds from Kelowna.

The company was acquired by Procera Networks, a Silicon Valley, NASDAQ listed company for $28 million.

“I really appreciated his advice through the whole process, and would be delighted to work with him again in the future.” Brent Bolleman, Vineyard Networks Investor & Director

Pacinian was the world leader in developing thin keyboard technologies for next generation computers and tablets. The company was still pre-revenue when it was successfully sold for $30 million.

The company was in Coeur d’Alene, Idaho and financed entirely by Angel investors.

The company was acquired by Synaptics, a Silicon Valley, NASDAQ listed company.

“…Johnny and Jim went to Vancouver as skeptics and came home as believers…” -Bill Payne, Pacinian Investor & Board Observer

“…Basil helped us realize this isn’t the way to sell a company – unless you want to wind up negotiating one-on-one in a bear hug with somebody telling you how much they love you while seeing how cheap they can buy the company.” -Johnny Humphreys, Pacinian Chairman

Based in BC and Alberta, co-founded in 2007 by Dr. Noel Swanson and Darren Warmuth, Allegretto was a virtual company. The company was bootstrapped, and their families and employees were the only shareholders.

Allegretto was successfully sold to an undisclosed US investor.

“…Throughout the whole process Basil kept things moving and maintained a very positive and reassuring attitude. He was on the ball, available at all sorts of odd times and days, and fully involved with the process at all times. Next time I do an exit, Basil will definitely be the man.” – Dr. Noel Swanson, CEO. 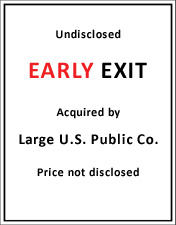 Unfortunately, this early exit is covered a non-disclosure agreement. It is a classic example of the type of M&A transaction that I write about in my book Early Exits.

The company was not only pre-revenue, it was less than twelve months old.

The CEO pitched a large, public US company on a paper design for their product. His goal was to see if they would order some if he could deliver a prototype.

A few months later, they started to ask about acquiring the company. The CEO contacted me, and three months later, the deal was closed. A little more information is included in the CEO’s testimonial.

“I can conclusively say that Basil’s contribution increased our ability to complete the transaction.” -Anonymous, CEO 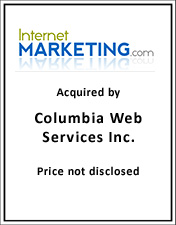 The Internet Marketing Center, founded in 1996, provides information, training and coaching for online businesses. The company was entirely owned by a private equity fund in California.

There were several bidders in Canada and the US. The successful acquirers were two well known, successful internet entrepreneurs Dr. Noel Swanson and Darren Warmuth.

“Leading the Internet Marketing Center was an extraordinary challenge…The most important value Basil added was helping me drive an exit process and transaction that faced many complex hurdles…[he] was always there to drive the momentum of the deal.” -Andy Morden, Past IMC CEO 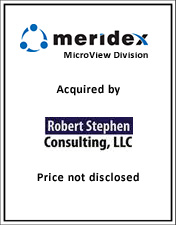 This public, BC based software company wanted to sell one of its business units. The business provided wireless mobile access to a large software application for facilities management.

The successful acquirer was a company in Silicon Valley.

“Basil Peters never gives up…It looked like an easy sale at the beginning, but there were several unexpected challenges that threatened to kill the transaction along the way. Basil’s brilliant strategies and negotiating skills managed to break through each obstacle.” -Darren Nicholls, Meridex CEO

At Parasun’s second strategic planning retreat in September of 2005 the board and management agreed that the exit strategy was to sell the company for more than $10 million by late 2006 or early 2007.

“Basil…drove the Board and management politely but relentlessly to maximize the value and attractiveness of the company.” -Barry Carlson, Parasun past CEO and Chairman

The Parasun exit completed on schedule but for 50% more than the goal.

The acquisition of Sunaptic by Visiphor is another good example of how multiple bidders can increase the final price by 50% or more.

“[Basil] then worked tirelessly to ensure that the entire process went smoothly for both parties, brokering discussions, suggesting solutions to impasses, and generally supporting the process.”

Occasionally an exit goes much better than anyone dared to hope…the PCS Wireless exit worked out exceptionally well for some of the participants even after the company looked like it wasn?t going to be a success.

“Your strategy worked so well that the companies merged and on the back of the Broadband Network sale, our stock went up over 400%.”

I founded Nexus while I was still in grad school. It grew to be the second largest manufacturer of cable TV headend equipment in the world. Today, it’s part of Cisco.

It was my first company and I learned everything about running a company on the job. Unfortunately, I made the classic mistake of thinking that I could also learn fast enough to execute the exit myself. The exit closed, but only because we were lucky – several times.

Parts 1, 2 and 3 of this video describe all of the things I did wrong in my very first exit and the first time I lost several million dollars. Part 4 contrasts the Nexus exit with the Parasun case where everything proceeded according to a well developed plan.