Home » SaaS Valuation Multiples – How High Can They Go?

When an exit is on the horizon, tech entrepreneurs need to come up with a way to value their company. Software as a Service (SaaS) companies are almost always valued using a Revenue Multiple. This is described in the companion article: Methods for Valuing Technology Companies.

SaaS company valuation starts with the current average multiple for SaaS public companies and then adjusts the multiple up or down depending upon a myriad of factors.  However, the public SaaS multiple is highly volatile and is becoming less reliable as a valuation tool.

The graph below, from SaaS Capital, depicts the SaaS public multiple from 2008 to Q2 2022 based on revenue run rate:

During the Great Recession in 2008, the multiple was less than 2x. As the economy recovered, helped by the massive infusion of monetary stimulus, the multiple steadily increased, almost hitting 10x in 2015. At the end of 2016, the multiple retreated to 6x. It rose to 11x in 2018, and bounced between 8x and 10x until the pandemic hit in 2020.  The pandemic cratered the economy in March, 2020. This prompted the US Federal Bank to pump trillions of dollars into the economy to stimulate demand. However, a good chunk of the stimulus found its way into the capital markets, causing a massive increase in stock prices.

The SaaS Capital Index jumped from 8x at the beginning of the pandemic to 17x.  It bounced around at that level until the end of 2021 when rising inflation and increasing interest rates cooled the multiple to 7.5x by June 30, 2022.  The graph below shows that in the space of 2 years the multiple went from 8x to 17x and back to 7.5x. 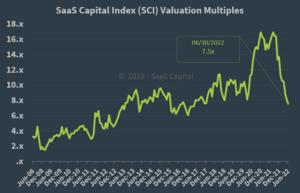 How did this volatility impact the valuation of SaaS businesses? With some skepticism, it would appear:

Several writers noted the extreme volatility of the public SaaS values. It seems that knowledgeable industry observers were out of sync with the SaaS market multiples.

I found the most interesting treatment from Thomas Smale at FE International. He wrote a valuation methodology in 2016 (now deleted) and updated it for 2022. For small companies he uses Seller Discretionary Income (SDE) instead (i.e. EBITDA plus adding back owner compensation  and other discretionary expenses).  [i]

In 2016 he summarized the methodology in the following graph:

where the Multiple is on SDE, not revenue.

Subsequently, in 2022, Smale split the multiples into two components; one for companies valued below $2M and one for above $2M.  He separates the graphs into two graphs shown below:

Smale treats the $2M threshold as a major discontinuity. He splits the analysis into 2 sections at that value to contain the volatility to a certain extent.

Note that the multiples have moved up between editions of the methodology, particularly for companies greater than $2M, reflecting the overall growth in multiples between 2016 and 2022.

The takeaway from this might be that the Revenue Multiple is much more volatile than the performance of the companies it purports to measure. The multiple is used to determine the valuation of a company for the purpose of an investment or exit. This will affect the company for the rest of its life. How sensible is it to materially affect a company in the long term by a variable that is highly volatile in the short term?

Given the significant effect on the growth of SaaS companies, the industry needs to find a new valuation anchor, one that reflects the strength of the SaaS companies rather than the irrational swings of the monthly revenue multiple.

[1] Note that SDE is not widely used as a valuation tool.  EBITDA is a more reliable measure as it includes owner compensation and other expenditures required to operate the business.  SDE is useful only if the entrepreneurs are prepared to accept below market compensation which is not realistic except in the short term.  Acquirers will normalize the EBITDA calculation to include all required expenses and use that measure.