Home » HOW TO VALUE A SAAS COMPANY

You need to know how they work.

In 2022, after the buoyant days of the past decade, SaaS company valuations are falling and business models are being rewritten.  Software as a Service entrepreneurs contemplating a financing or an exit need to understand how private SaaS companies are valued using the Revenue Multiple valuation method. The formula seems simple on the surface, but is heavily nuanced in its application. This article explains the components of the Revenue Multiple method and some of the considerations that inform the numbers.

The model consists of an apparently simple calculation:

However, there are many factors which inform this calculation:

Monthly recurring revenue is the revenue earned from customers which pay a subscription fee which recurs each month.  The Annual Recurring Revenue is either the sum of the recurring revenue over the trailing 12 months (TTM) or the current 12-month run rate.  That much is easy.

However, developing the Multiple is considerably more complex.  It captures a myriad of factors reflecting the performance of the SaaS company and the judgement of the valuator.

The process to calculate the revenue multiple for a private SaaS company has several steps:

The first step is to determine the current SaaS public company multiple.  The challenge is that the public company SaaS multiple is so highly volatile that it strains the credibility of the process.  See companion article: SaaS Valuation Multiples – How High Can They Go?   and the SaaS Capital Index  graphed below.  Note that the range is from 2x in 2008 to 17x in 2020, a factor of nearly 10. Clearly, this is not indicative of the true company performance, and more a reflection of market exuberance or pessimism. 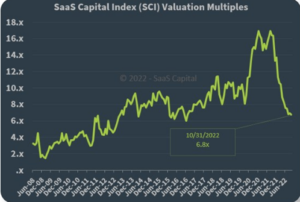 We won’t debate the utility of the volatile public company multiple in this paper.  To avoid that conversation, we will assume that a SaaS public company revenue multiple has already been determined.

So, starting with the public company multiple, the first adjustment is to convert the multiple to the corresponding private value.

Private companies always trade at a discount to public companies because there is a limited market for private company equity.  SaaS Capital, which has studied SaaS company valuations in depth, and also generates the SaaS Capital Index,  increased their estimate of the private company discount from 28% to 50% in 2022.  In late 2022 the significant decline in the SaaS public company multiple shown in the Index indicates that the private discount should narrow.  Let’s use the previously stable 28%. Converting the percentage discount to a change in multiple suggests a reducing the multiple by about 1.3x on a baseline multiple of 4.6x.

In the rest of this article, the private SaaS multiple becomes the 0 point on the adjustment graphs.

Growth rate is the single most important variable in determining the private company revenue multiple. Because SaaS revenues are sticky, the faster the growth, the higher and more predictable the recurring revenue stream will be, and the more profitable the company.

The size of the company is also important.  Bigger companies are awarded bigger multiples.

The challenge is that the correlation is not precise.  The graph below shows that a weak correlation of only about 60%.  So, a faster growth rate is better, but it is difficult to be more precise.

Here is one approach: The graph below shows the average and median growth rates of SaaS companies according to their size: 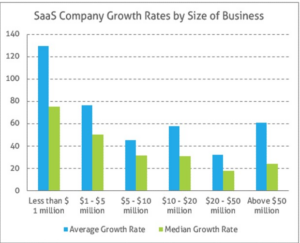 The link to this graph is no longer active.

Companies which generate higher or lower growth rates than their peers are rewarded or penalized. If your SaaS company is growing at twice rate the median growth rate in its size segment, the multiple would increase by 50%. For example, the median growth rate for a company generating $7M in revenue is 30%. Suppose the baseline revenue multiple is 5.0x.   If your company is growing at 60% (double) it would be given a premium of half the private company multiple in that range, 2.5x, bringing the adjusted multiple to 7.5x. (Note: the source for this analysis is no longer available.)

This rule of thumb may be most useful when the average multiple is in the single digits. During the 2020-2021 bubble when the public company multiples inflated into the double digits, it is unlikely that a 50% premium was achievable.  More likely it had already been priced in.

Conversely, a company growing slower than its peers will have a much smaller multiple.

Here is a second approach which quantifies the affect of size and growth in the SaaS multiple. Again, this comes from a link  which is no longer available:

Typical gross margins for software companies are about 80%.  As depicted in the graphic, SaaS companies exceeding 85% in gross margin earn a premium while those generating less than 75% are penalized.

Companies that can better defend their revenue stream from competition earn higher multiples. Some examples:

Companies targeting a large market opportunity won’t reach market saturation for years. Generally, an addressable market exceeding $1 billion is sufficient. Companies with markets greater than $10 Billion will enjoy a higher multiple, but markets less than $1 billion may result in a lower revenue multiple.

If the software company is overly dependent on a few large customers, it will be heavily penalized in its multiple, because the loss of any of them would materially affect the business. Many private equity acquirers will not entertain an acquisition of a company with high customer concentration. SaaS companies typically sell into the Small and Medium Enterprise market with many customers and don’t suffer from a customer concentration problem.

The same concern applies on the supplier side. If a company is dependent on relations with a few large partners or suppliers, a change in terms, or a change in business direction, could easily sideswipe the business.  Some travel, eCommerce and data analytics companies are critically dependent on data from large partners.

This will reduce their valuation and multiple and may cause potential buyers to walk away.

There are several key performance indicators for SaaS companies:

The infographic below summarizes the myriad of performance factors that inform the Revenue Multiple used to value SaaS software companies. The biggest impact, both on the upside and downside, is the growth rate.